Belén Soriano Cavero - Deputy-Director for the Technical Area and Reinsurance
Pedro Comesaña Sánchez - Senior Expert, Technical Area and Reinsurance Sub-directorate
Consorcio de Compensación de Seguros
The exceptional risk surcharge was modified two years ago by the Decision of 28 March 2018 by the Direction-General for Insurance and Pension Funds approving the compulsory surcharges payable to the Consorcio de Compensación de Seguros (CCS or Consorcio) by the insured for coverage under the compulsory Extraordinary Risk Insurance Scheme.
As explained in the article published in issue number 8 of this magazine, the purpose of the Decision was to slow the growth of the CCS's stabilisation reserve to cover damage to property, personal injury, and business interruption from the listed 'extraordinary’ risks, to introduce certain technical improvements by adjusting the regulations to standards for applying the rate ensuing from responses to a consultation by insurance companies, and to simplify how the rate is applied.
The new Decision took effect gradually from 1 July 2018 for newly issued policies and renewals but was not applicable to adjustments to previously existing policies.
Therefore the first surcharges collected under the new Decision, for the month of July 2018, reached the Consorcio in August of that same year.
In quantitative terms, the adjusted rate has been implemented by reducing the premium rates for all Consorcio covers. The margin for the average combined ratio for the period from 1987 to 2016 was sufficient, and severity was not high.
According to estimates resulting from actuarial studies carried out when drawing up the current rate for exceptional risk coverage, after switching over from applying the 2006 Decision to applying the 2018 Decision to the same sums insured, the Consorcio's surcharges were to be lowered by an average annual amount of 13.3 %.
Estimates by type of insurance:
Two years after the Decision took effect, we have analysed the impact of applying the Decision, to see whether the estimated 13.3 % decrease in the surcharges on the same sums insured has actually materialised.
We first compared the surcharges collected by the Consorcio in the first 12 months from when the new rates took effect (August 2018 to July 2019) to the surcharges collected in the preceding 12 months (August 2017 to July 2018), which we have taken as the base period for the comparison.

Figure 1. Base period and first 12 months of the new rate.

The following table sets out the surcharges collected by the Consorcio in the two periods described above:

Figure 2. Surcharges collected in each period.

As a starting point, it should be noted that the reduction in revenues in the first 12 months of application of the new rate compared with the preceding 12 months, the base period, came to 7.2 % for the three types of insurance.
Nevertheless, it needs to be pointed out that this preliminary analysis contains an element of distortion because the sums insured have increased compared to the base period over the period in which the new rate has been in effect.
To remove this distortion, we have taken as the reference data the sums insured reported by insurers for each of the periods based on the statistical data sheets reported to the Consorcio for the year 2018 and data extracted from the Surcharge Reporting System for 2019.  Figures 3 and 4 show the following:
In millions of  €

Figure 4. Surcharges collected, removing the effect of the increase in sums insured.

The conclusion we can draw is that in the first 12 months in which the new rate has been in effect, surcharges collected by the Consorcio decreased by 9.4 % compared with the 12 months that preceded entry into force of the rate.

It should be emphasised that this 9.4 % reduction in surcharges is less than the expected 13.3 % because application of the new rate has occurred gradually as time has progressed.

The next plot illustrates how, after removing the effect of the increase in the sums insured in the following six months (from August 2019 to January 2020), the decrease in the surcharges has continued, though more weakly compared to the months comprising the base period. 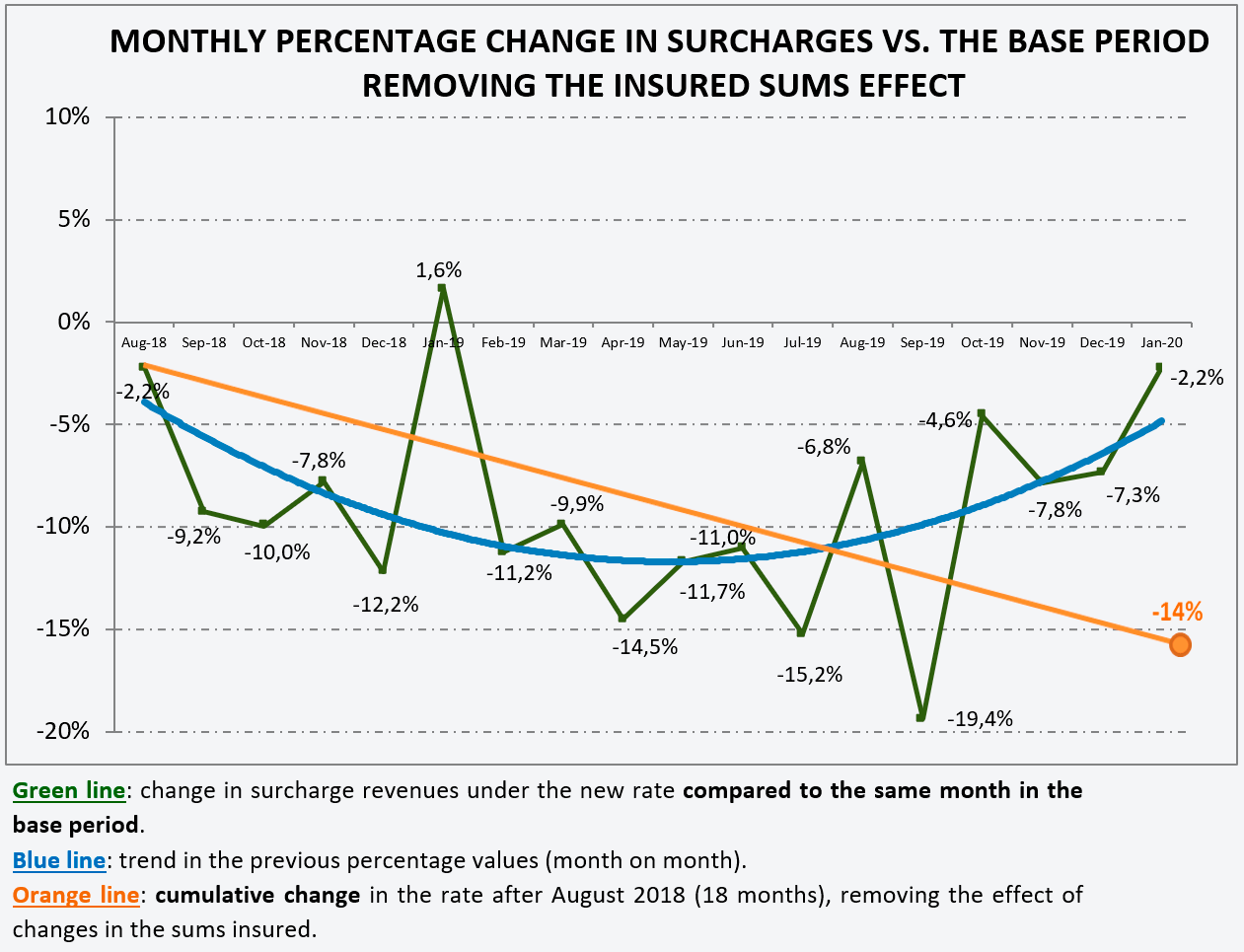 Considering the global month on month analysis, we would underscore that introduction of the new rate has been ongoing and has progressively affected the decrease in revenues. The blue line (tending to zero) shows that the effect of the new rate had been consolidated by around January 2020.

Comparing the 18 months during which the new rate has been applied to the preceding 18 months and removing the distortion arising from the increase in the sums insured, the decrease in the surcharges attains 14 %, quite close to the estimate of 13.3 %.

We can therefore conclude that, over an 18-month period, the impact of applying the Decision of 28 March 2019 on revenues from exceptional risk surcharges has been in line with projections.
According to estimates resulting from actuarial studies carried out when drawing up the current rate for exceptional risk coverage, after switching over from applying the 2006 Decision to applying the 2018 Decision to the same sums insured, the Consorcio's surcharges were to be lowered by an average annual amount of 13.3 %.

Estimates by type of insurance: